Even if we can't meet, let's play boardgames!

Just like casually jumping into a board game at a table, I wanna be able to do that online even if when can’t meet in person! With "Let's Play! Oink Games," you can play Oink Games' popular, small-boxed titles like, "Deep Sea Adventure" and "A Fake Artist Goes to New York," and more. Play at home with your family, online with your friends, or test your skills against CPUs. Plenty of ways to play! 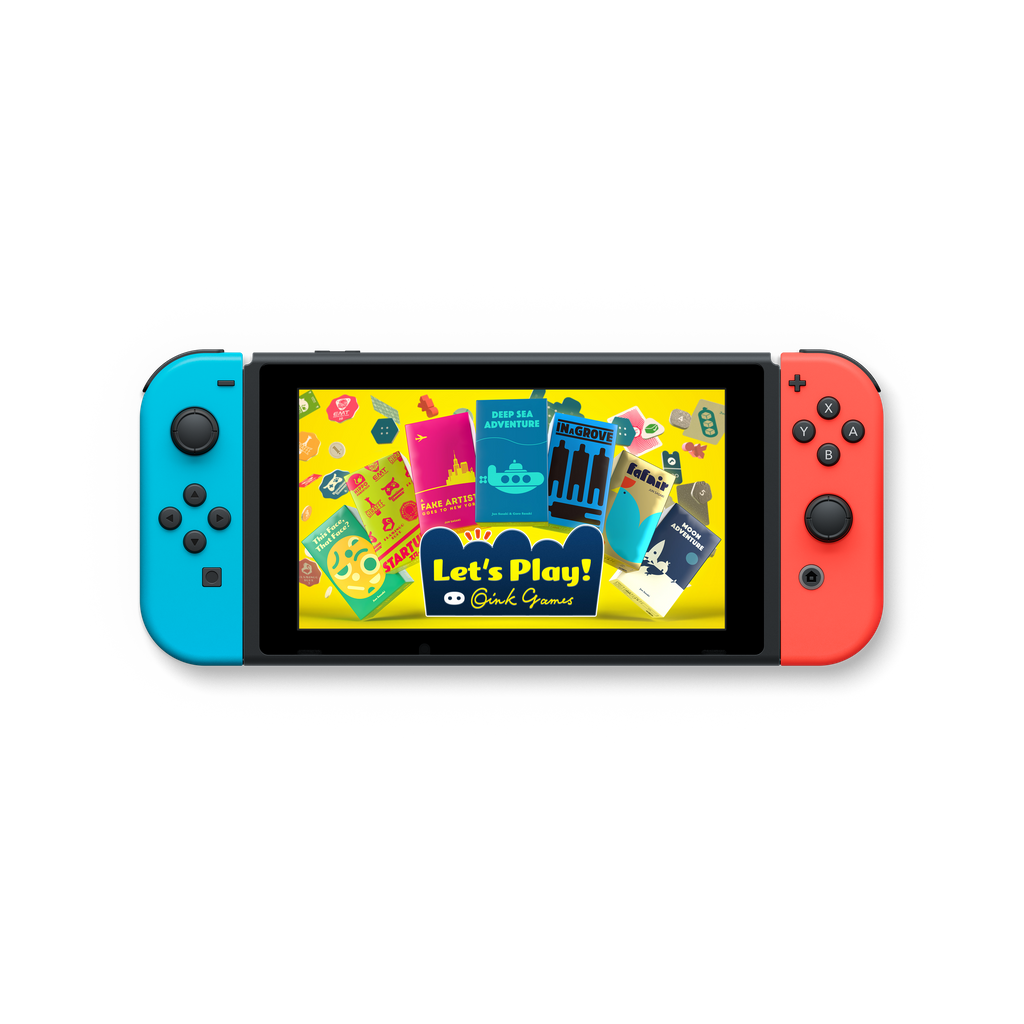 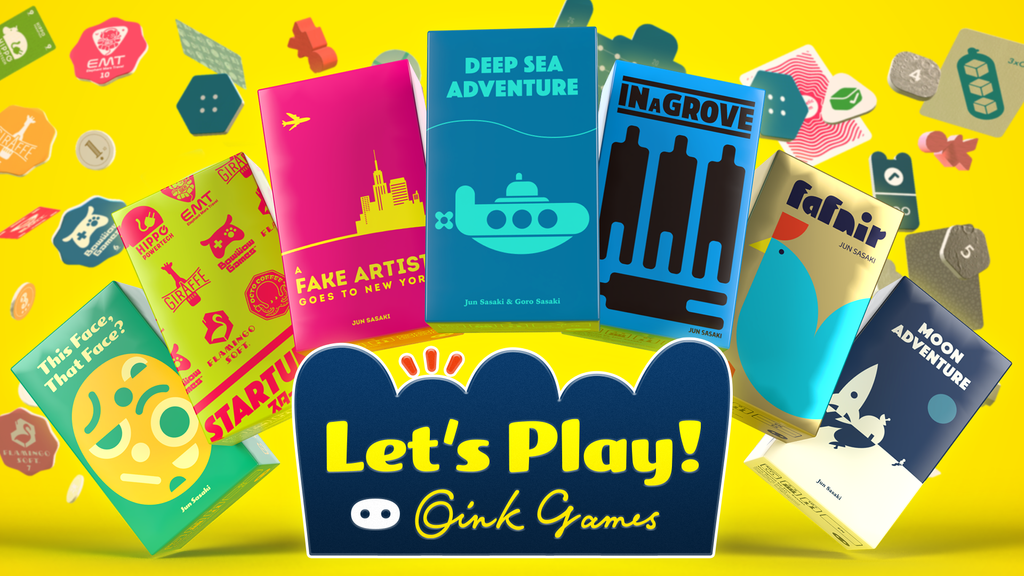 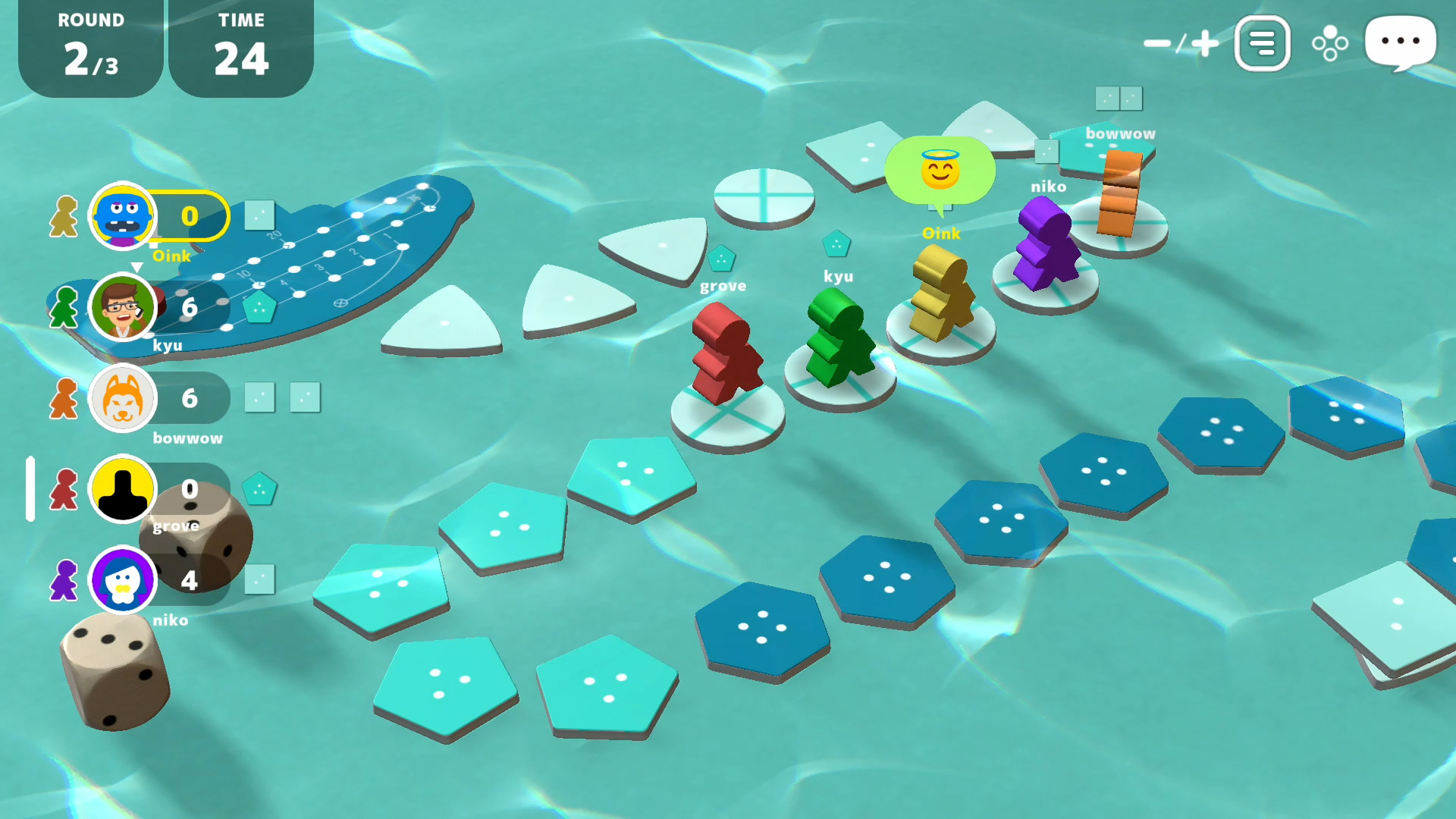 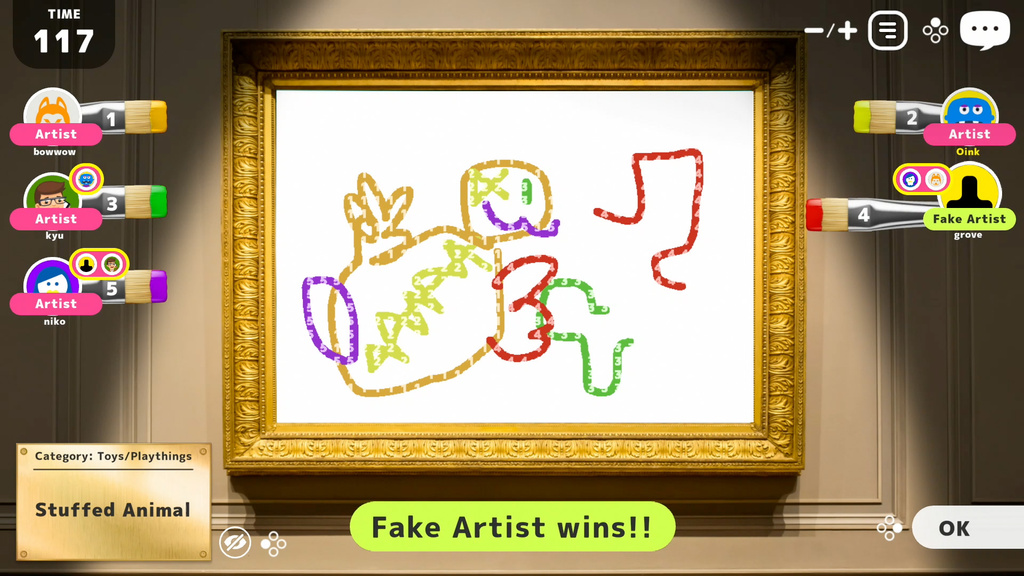 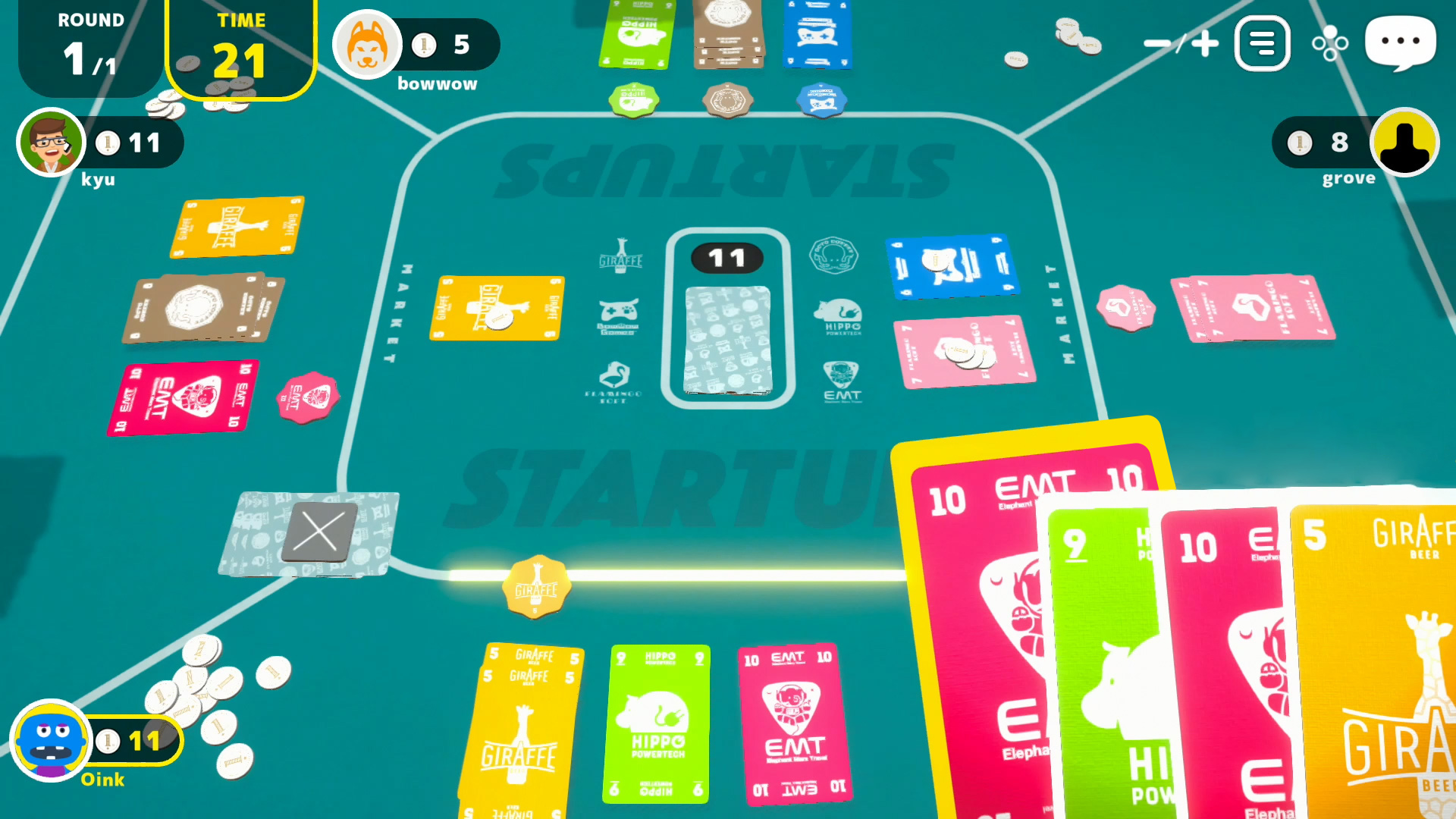 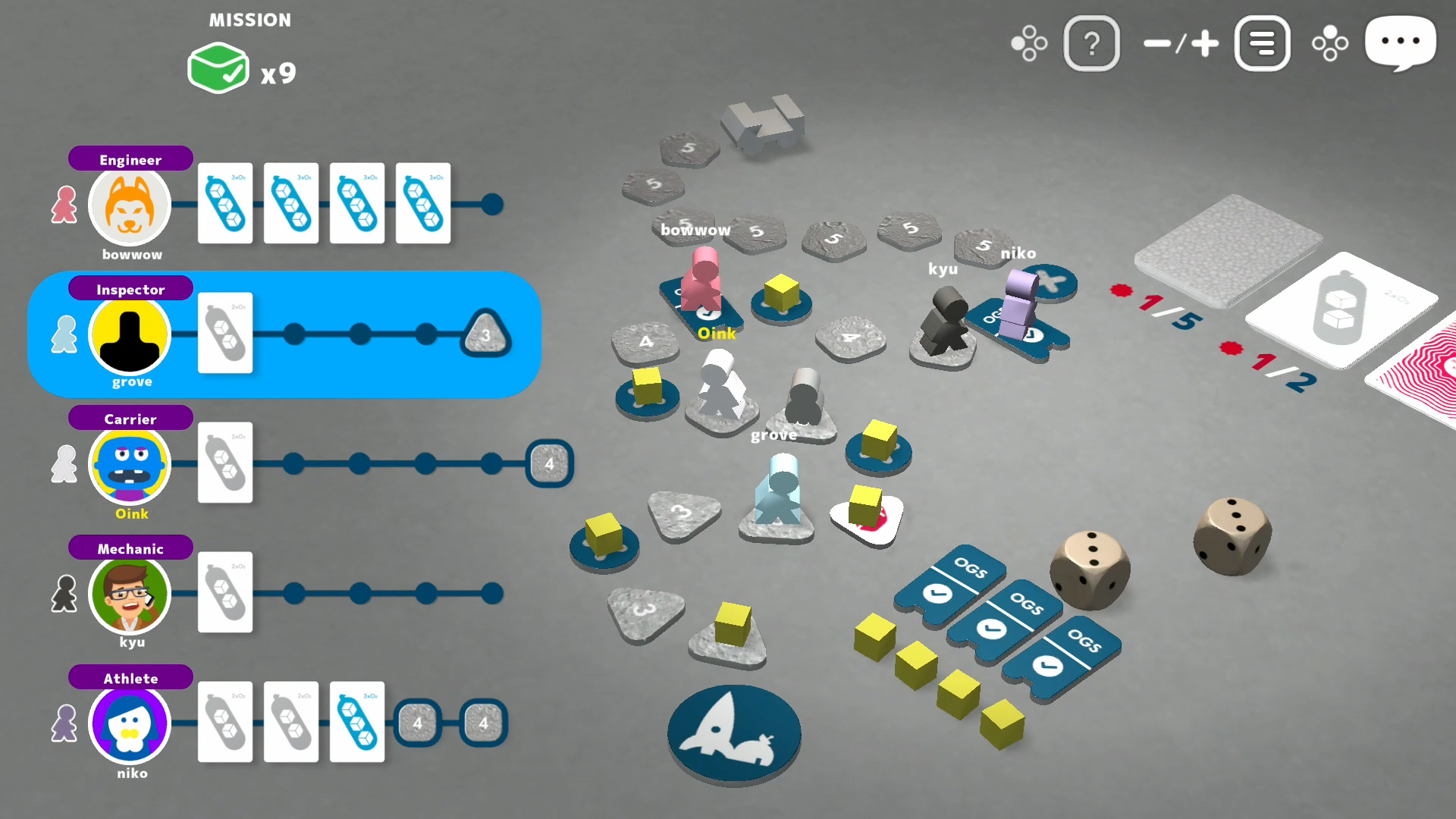 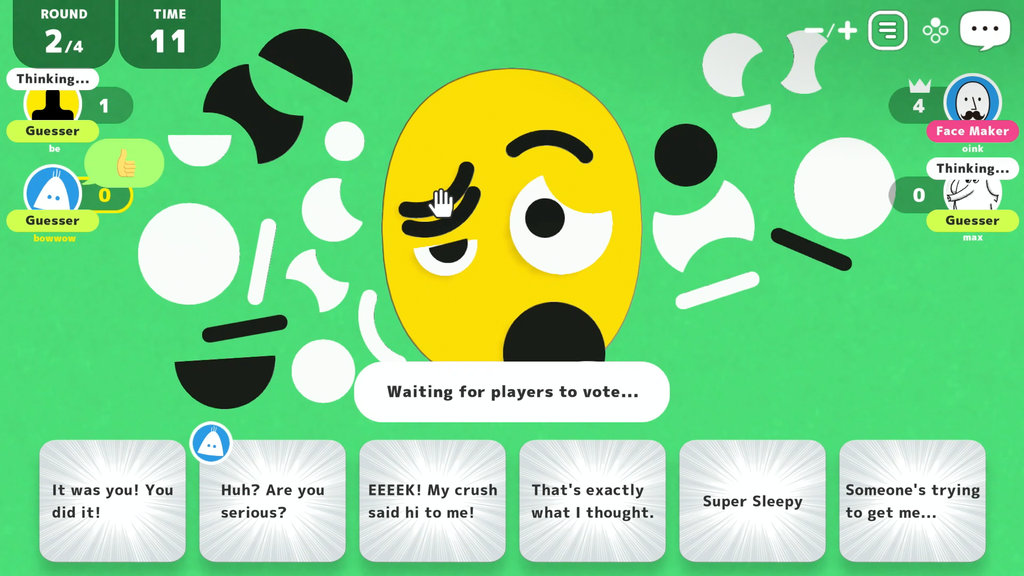 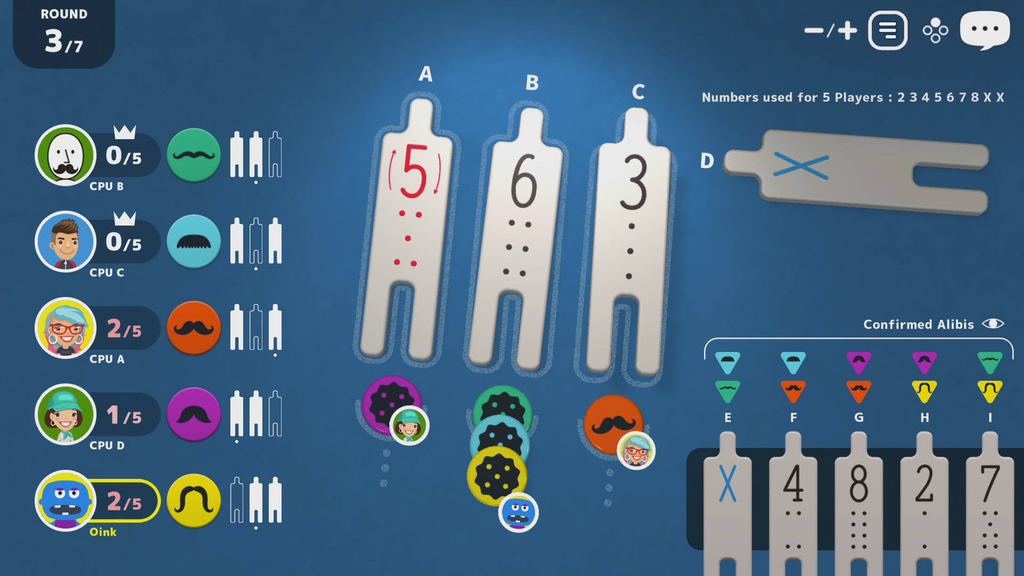 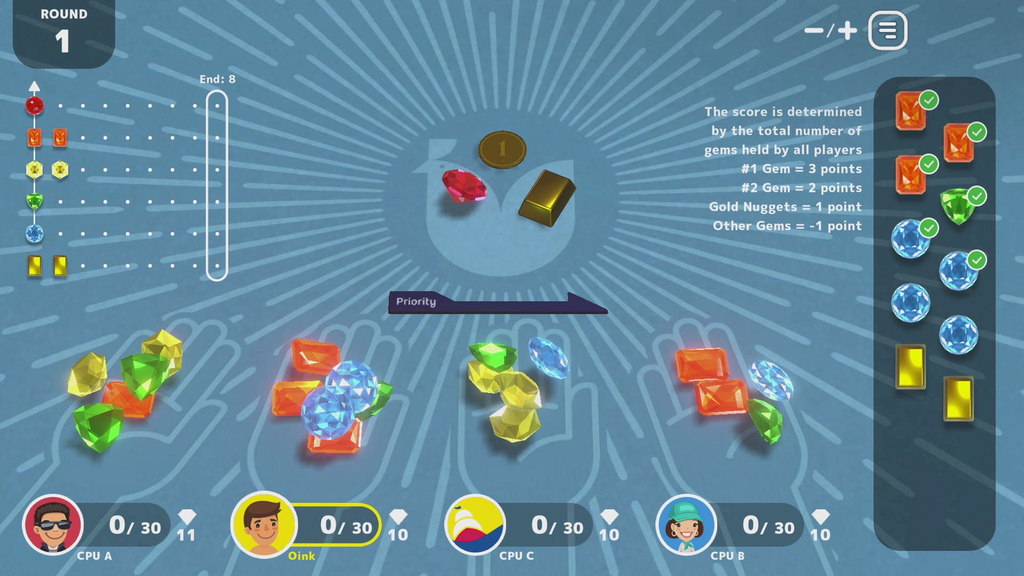 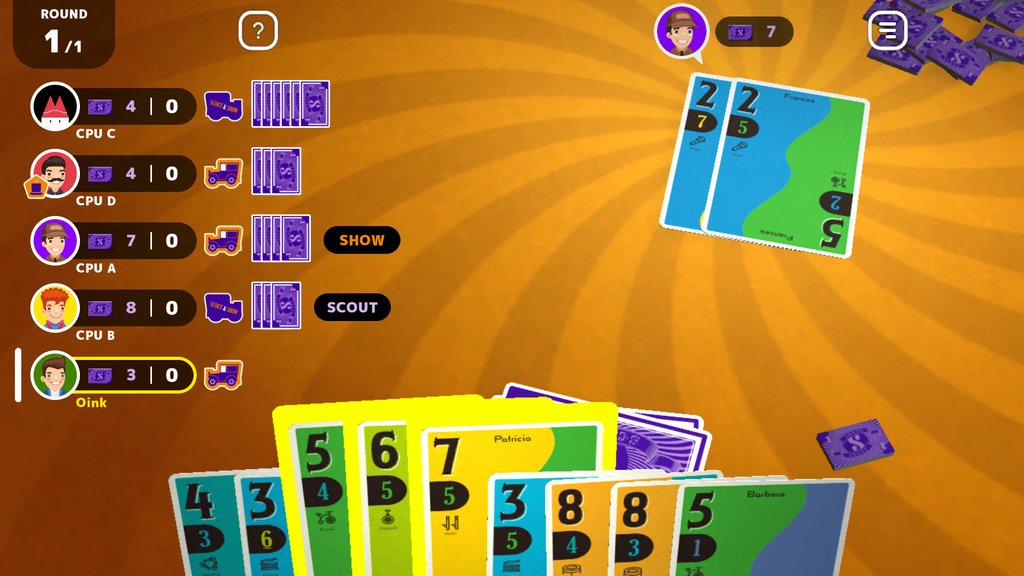 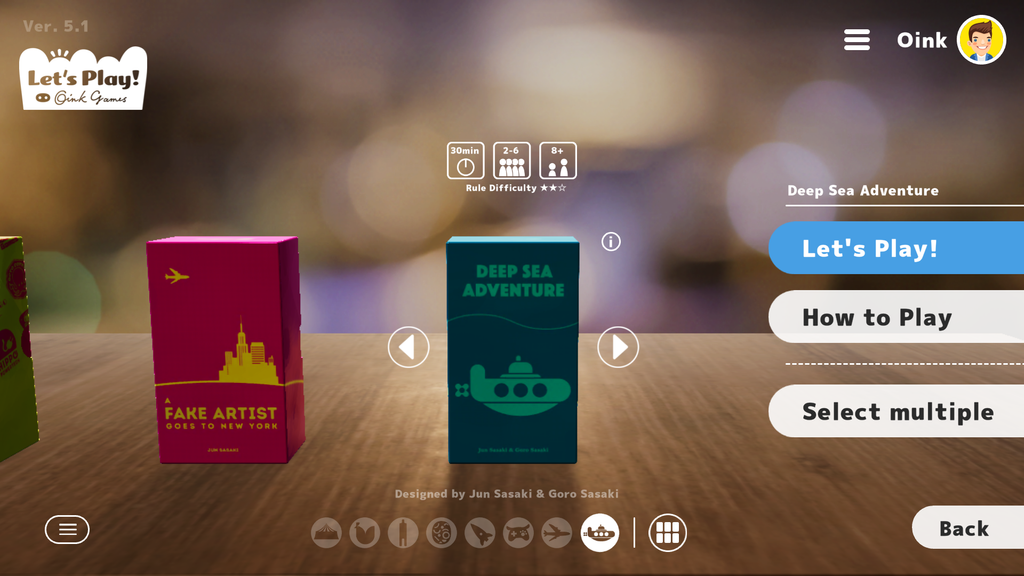 ●Multiplayer Online : supports online play with 2 to 8 players. You can play online with your friends in real time. Even if you don't have enough people, you can play with people you don't know and/or CPUs. *You need a supported device and copy of the software for each person playing Cross-platform play between the Nintendo Switch, Steam, iOS, and Android versions of the game are supported. Offline : supports offline play with 2 to 8 players. All you need is one main unit and one copy of the software. Up to 8 people can enjoy with a single controller on the same screen. *Some games don't support offline play Local Wireless play is also available on the Nintendo Switch, iOS, and Android versions.
●Solo Supports online matching with people from all over the world. You can also play against the CPU offline. *Some games don't support CPU play Click here for the number of players and supported play modes for each game

Included Board Games All of the featured games are popular titles that even first-time players can get excited about. A rich lineup of games, from competitive to drawing, and co-op games. And, even more titles are on the way!

A Fake Artist Goes To NewYork

This Face, That Face? 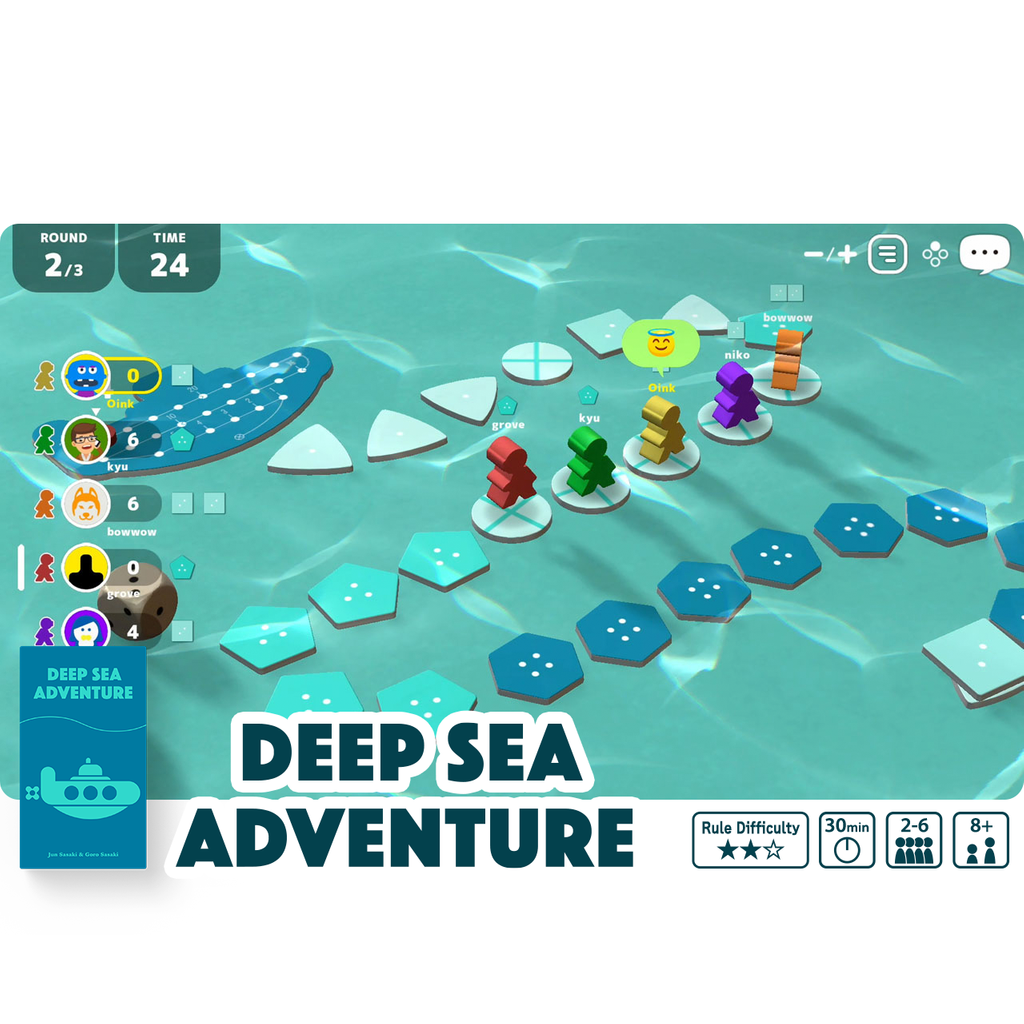 A popular title that’s sold more than 200,000 copies worldwide.
Treasures lay on the ocean depths, but oxygen is scarce Greedy explorers aboard a submarine in search for treasure at the bottom of the sea. They are all dressed in their diving suits and set out on a daring treasure hunt. But to their surprise, all the explorers are connected to a single air tank in this rundown submarine. Even one person’s recklessness can put everyone's life in danger. Will the explorers be able to bring back the treasure safely? This is a classic dice-roll game that's easy to play, and recommended for beginners!
Learn more...
How to Play
Supported Play Modes: ・Online: 1-6 Players ・Offline: 1-6 Players ・Playable with CPUs 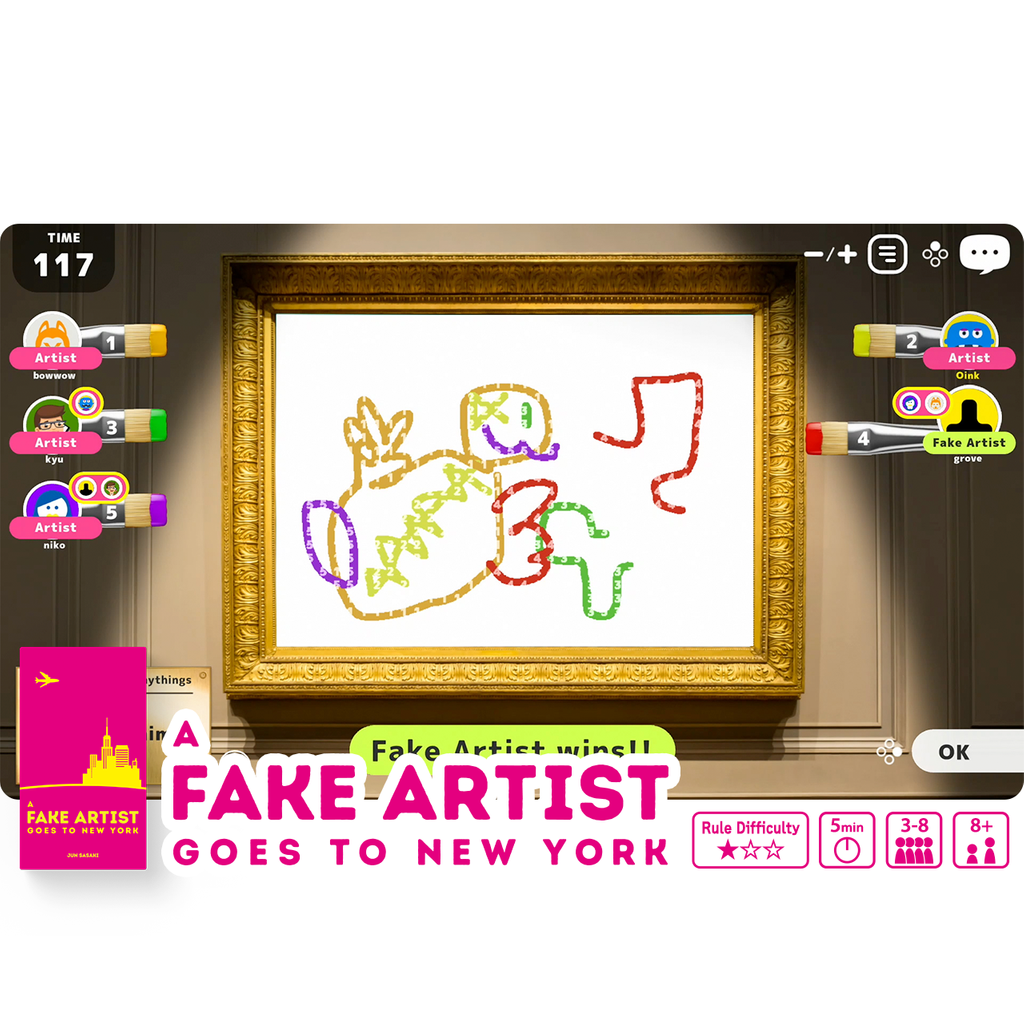 A Fake Artist Goes To NewYork

A drawing party game for everyone! Everyone draws one picture together...but one person doesn't even know what to draw. There is a fake artist hiding among the real artists - can you find out who it is? The fake artist has to be careful not to be identified and the real artists have to be careful not to make it too easy for the deceiver. A popular drawing social deduction game that you can jump into and immediately enjoy with large group of people.
Learn more...
How to Play
Supported Play Modes: ・Online: 3-8 Players ・Offline: 3-8 Players ・CPU play unavailable 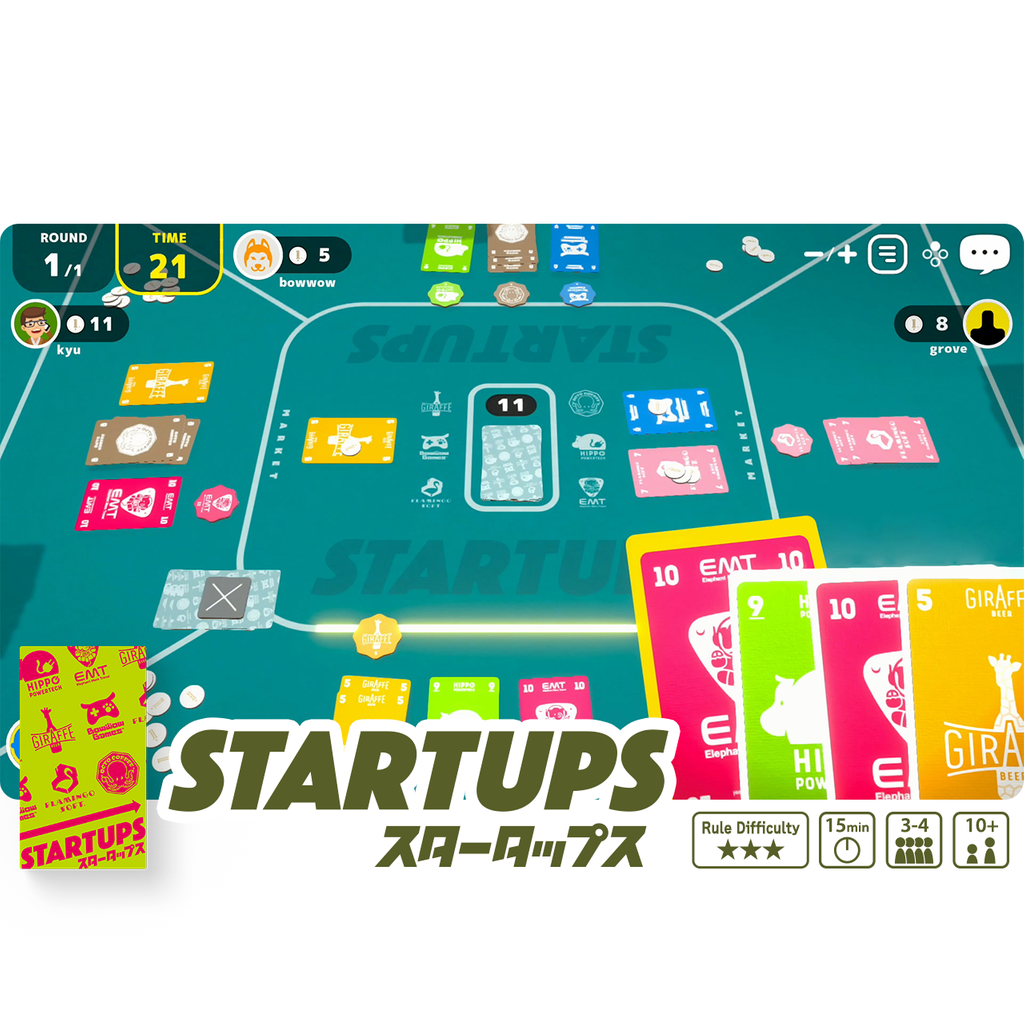 3 cards to decide your fate There are six companies that will change the world as we know it! You can be part of their success and be an investor. Become rich by making the right decisions! Only the single biggest investor can get money out of each company. Reading your rivals' next steps, use your capital along with three hidden cards to win, and become the biggest shareholder! A mix of luck and strategy, here’s a game you can enjoy over and over with a couple of friends, or with a group.
Learn more...
How to Play
Supported Play Modes: ・Online: 1-4 Players (CPUs can join when there are only 2 people playing) ・Offline: 1 Player ・Playable with CPUs 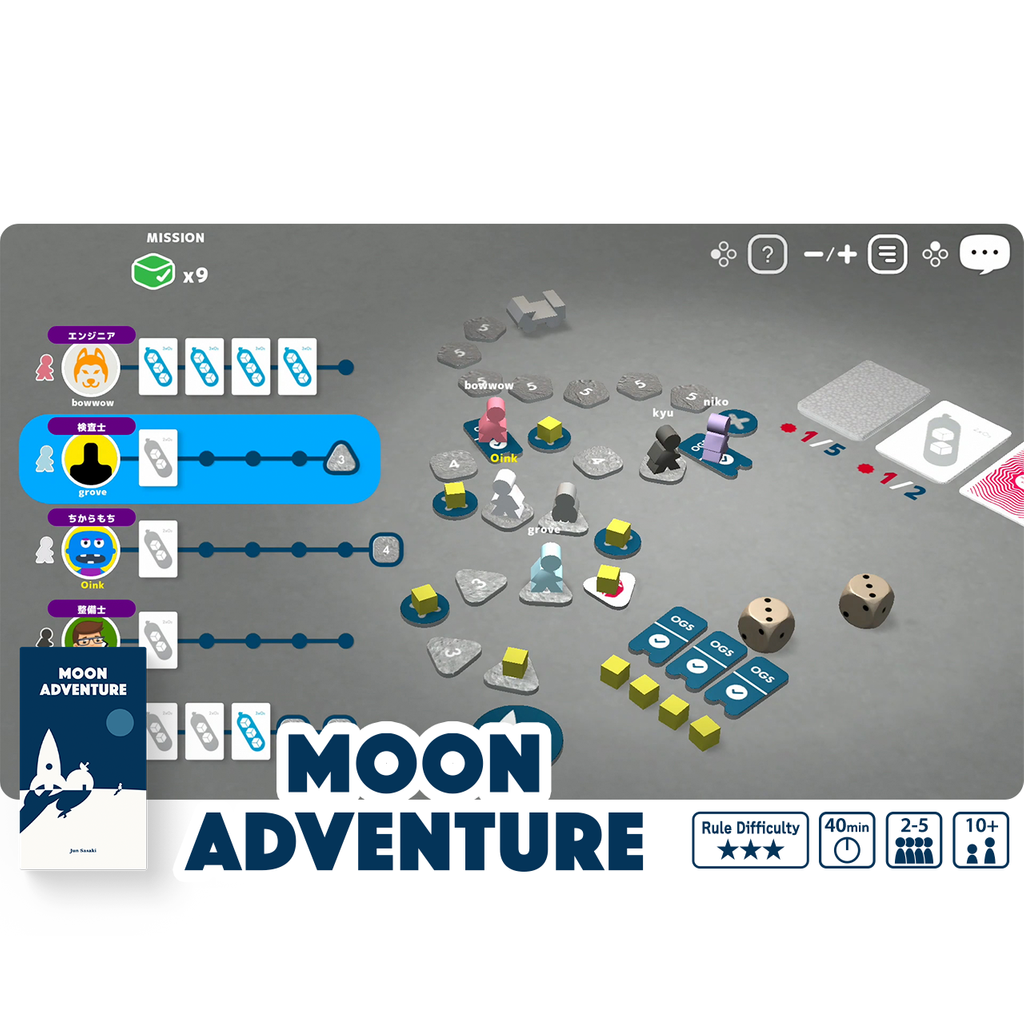 A co-op game to test your teamwork You are trapped on the moon due to a massive magnetic storm originating from the sun and all of the supplies have been scattered about the surface. You and your fellow astronauts are desperately trying to recover the scattered supplies, all while your oxygen levels are falling. Moon Adventure is a cooperative board game where everyone must work together in order to complete the mission. Trust in your wits and your friends to make it back alive!
Learn more...
How to Play
Supported Play Modes: ・Online: 1-5 Players ・Offline: 1-5 Players (If playing solo, the player will control all of the CPU's moves as well) ・CPUs will be controlled by the host 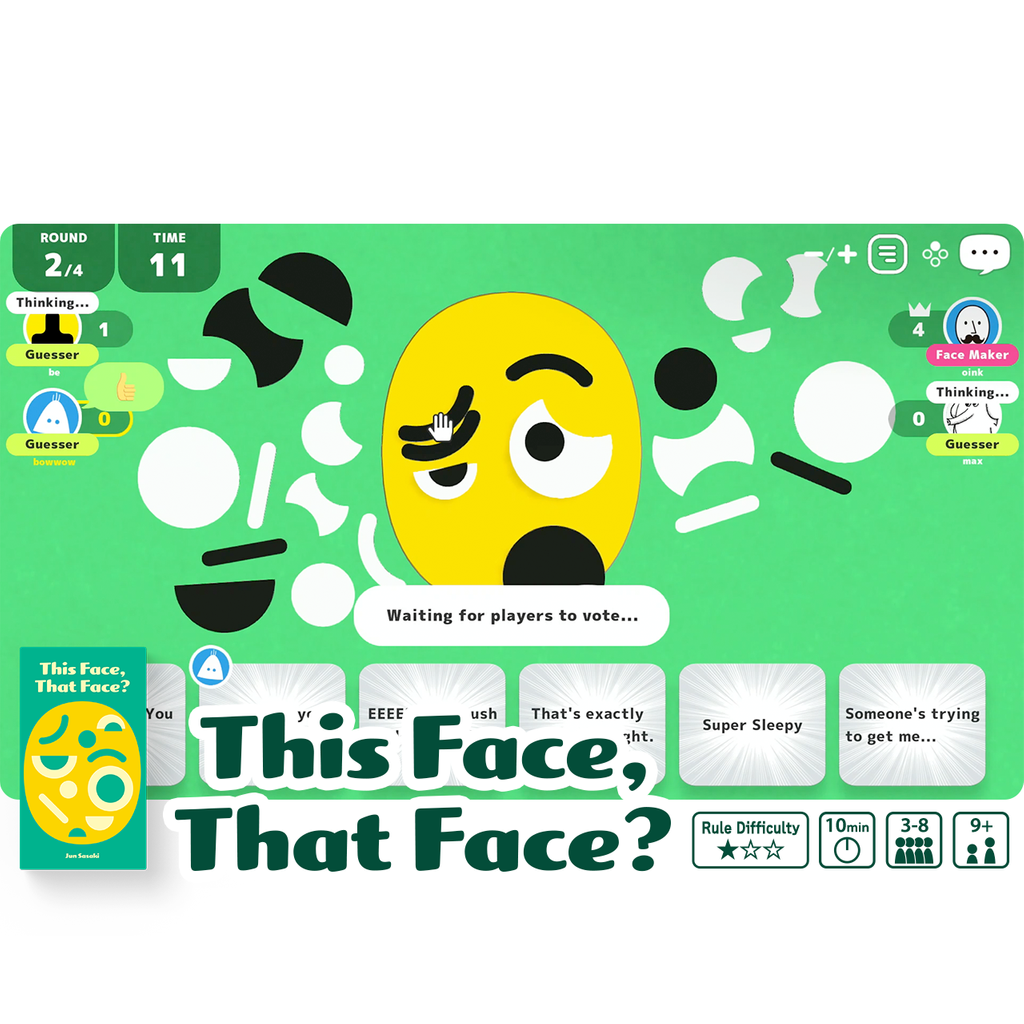 This Face, That Face?

What is this face? Provided are a variety of exclamations written on cards. Use your creativity to put together a face to match the text on the card highlighted for you. The amount of face parts are limited, but the expressions you can make are endless. If everyone guesses the card to your face, you get points! How well can you express emotions with just this "face?"
Learn more...
How to Play
Supported Play Modes: ・Online: 3-8 Players ・Offline: 3-8 Players ・CPU play unavailable 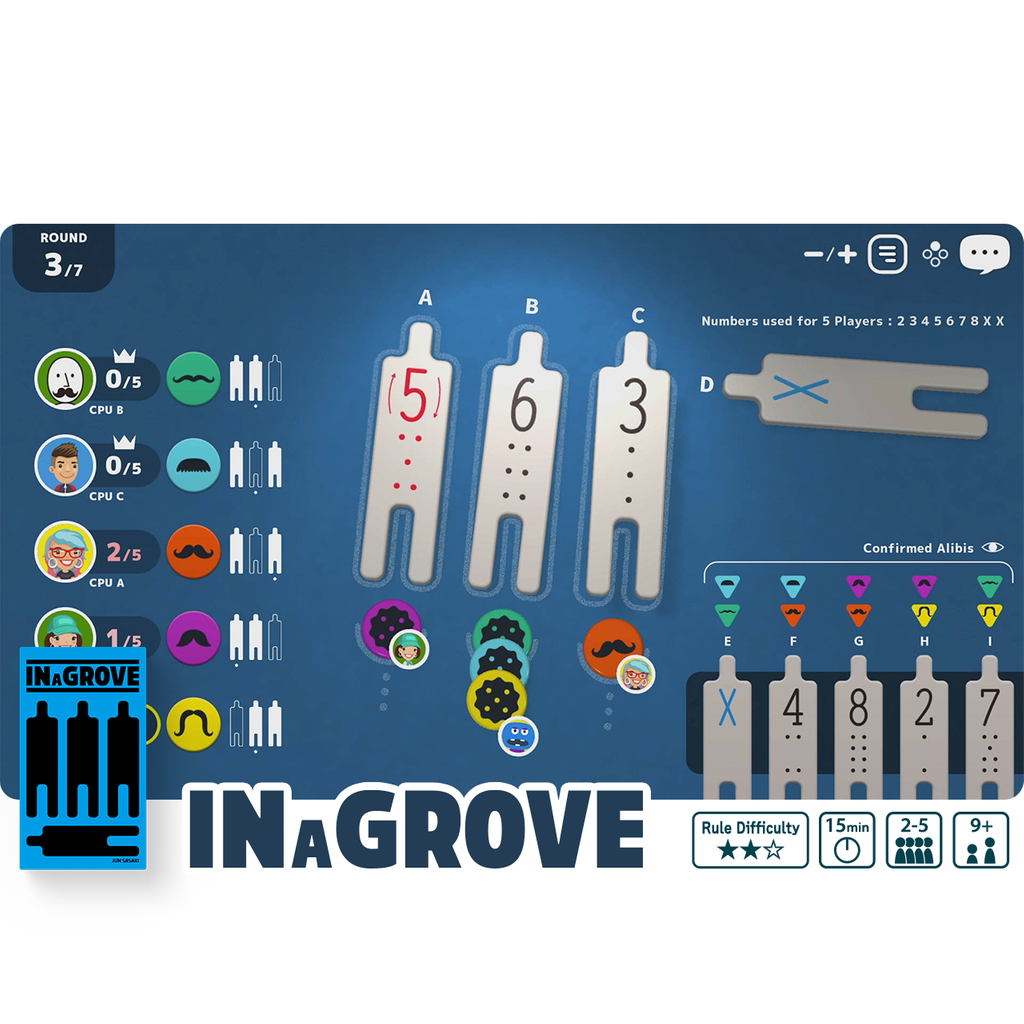 One of Oink`s best known titles, a game of deduction and deception. There are too many murders and too many detectives in this town! Today, several detectives witnessed a murder. With information only known to you, coupled with the deductions of the other detectives, you must skillfully use these to declare who you think the culprit is. Can you beat your rivals and become the best detective in town? A competitive guessing game with each players' thoughts being intricately intertwined.
Learn more...
How to Play
Supported Play Modes: ・Online: 1-5 Players ・Offline: 1 Player ・Playable with CPUs 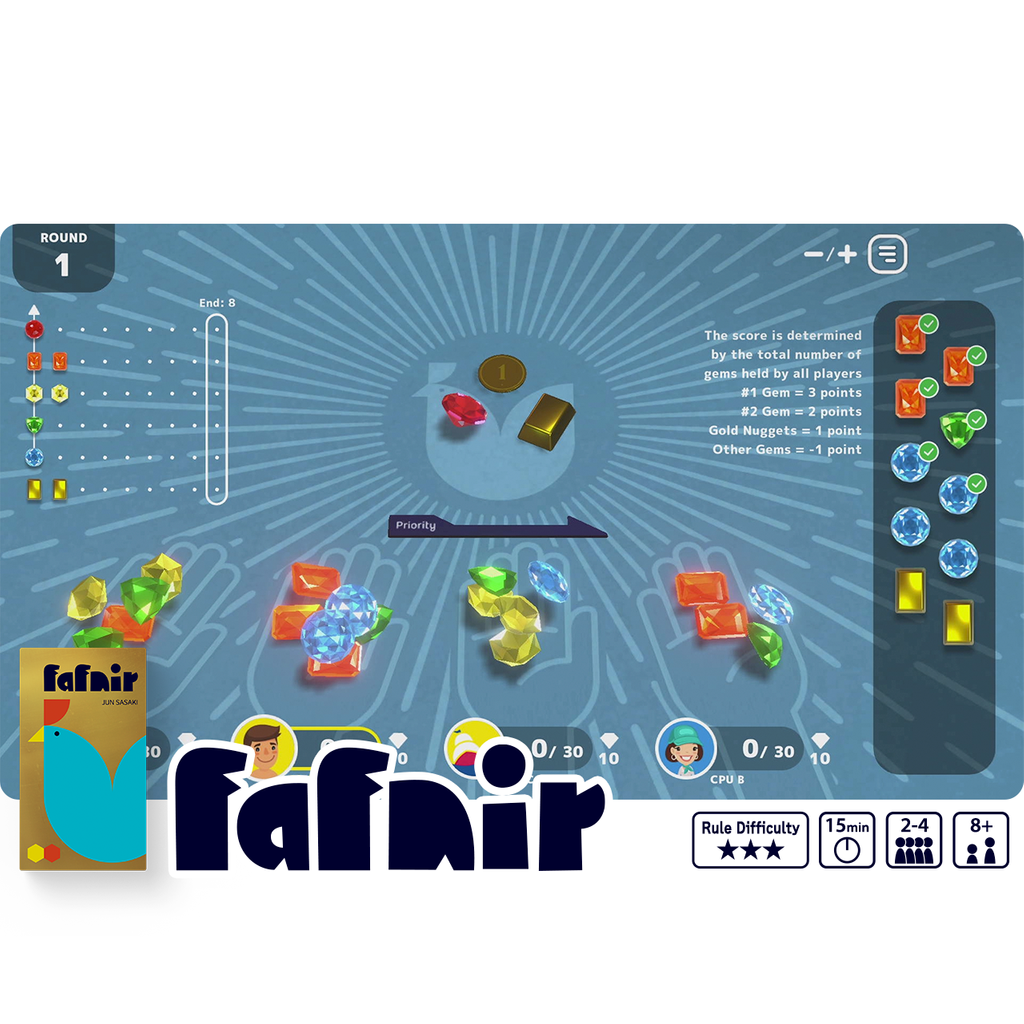 Trash Bin and Cash In A chicken named Fafnir lays 2 gems each day, but at times can lay more. The brothers that inherited Fafnir have decided that “The person that throws away more of their gems” can receive the freshly laid gems. The value of the gems fluctuate depending on how many the players are holding and by purposefully throwing gems away you can manipulate the playing field. In this simple strategy game, the goal is to make it to the end holding as many valuable gems as you can.
Learn more...
How to Play
Supported Play Modes: ・Online: 1-4 Players ・Offline: 1 Player ・Playable with CPUs 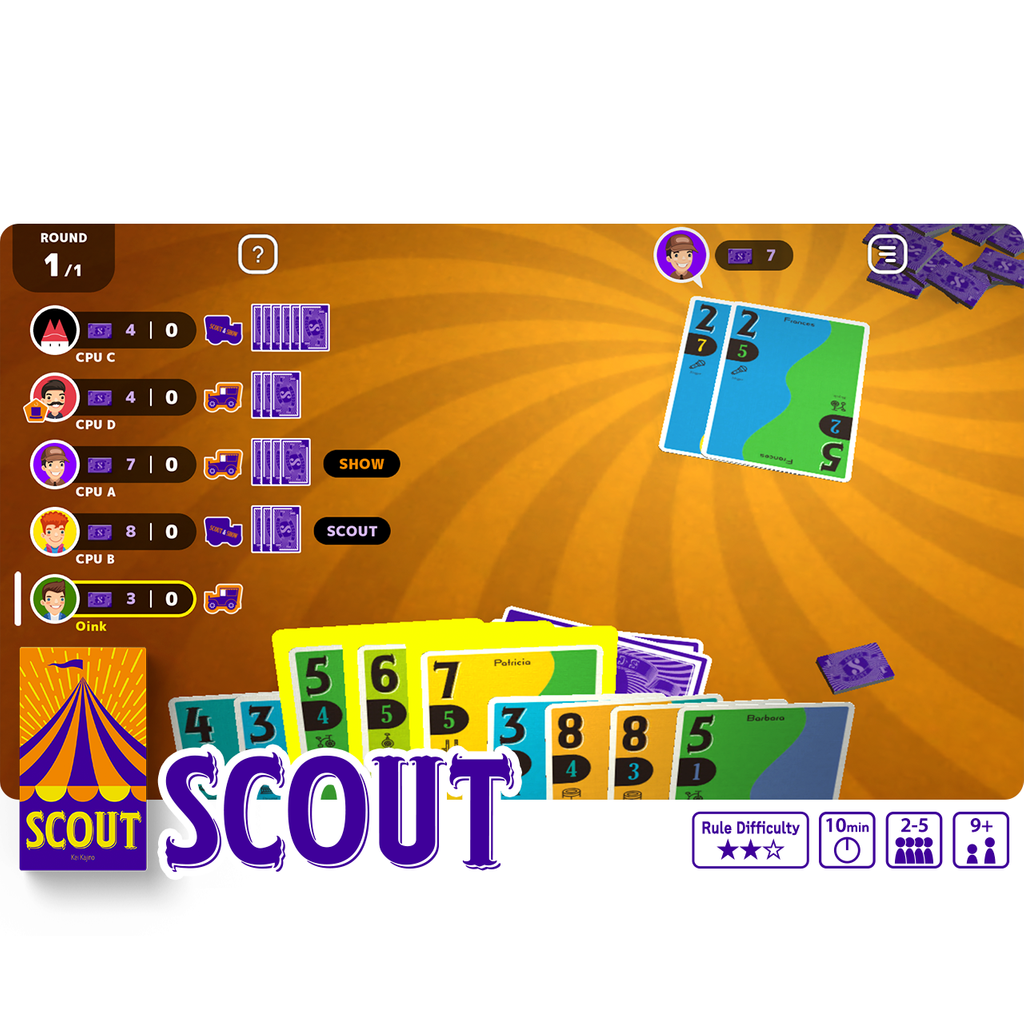 SCOUT for the show! (Spiel des Jahres Nominee!) You've suddenly been appointed as the leader of a circus. Using the members of your circus you must put together a show that will beat out your rivals. Everyone on your team has a specific role. To fill in the gaps on your team, try to scout members away from other circus groups! With the addition of just one extra person you may set off an incredible chain reaction that helps you create a show that no other circus will be able to surpass. Will you battle with your current crew members? Or, will you wait it out and try to recruit more members? You'll feel amazing when you make the right choices in this speedy card game!
Learn more...
How to Play
Supported Play Modes: ・Online: 1-5 Players (CPUs can join when there are only 2 people playing) ・Offline: 1 Player ・Playable with CPUs 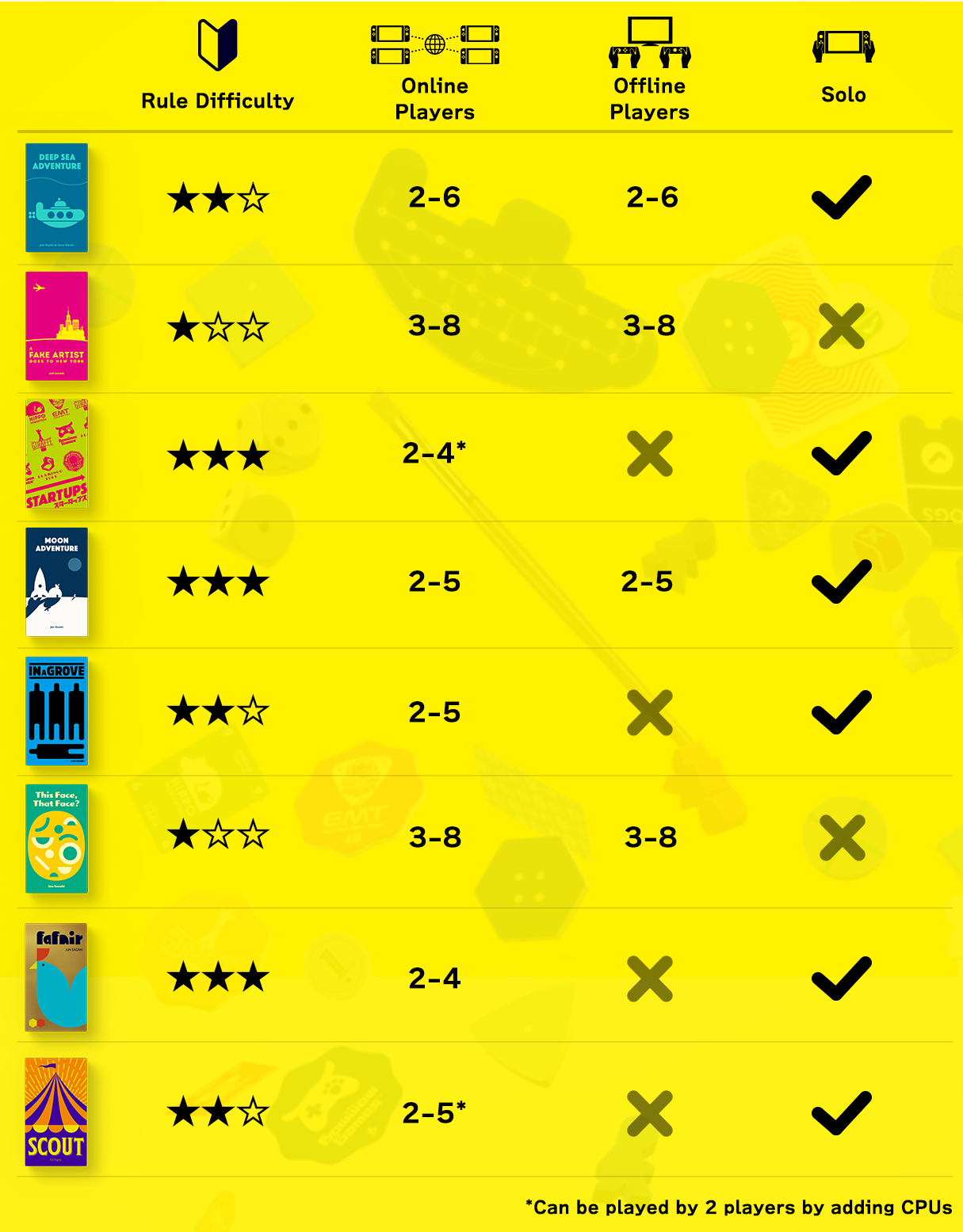 Purchasing Games
Depending on the platform, additional purchases are required for each game separately from the base game. iOS/Android versions of the game are downloadable for free with " Deep Sea Adventure" free to play. 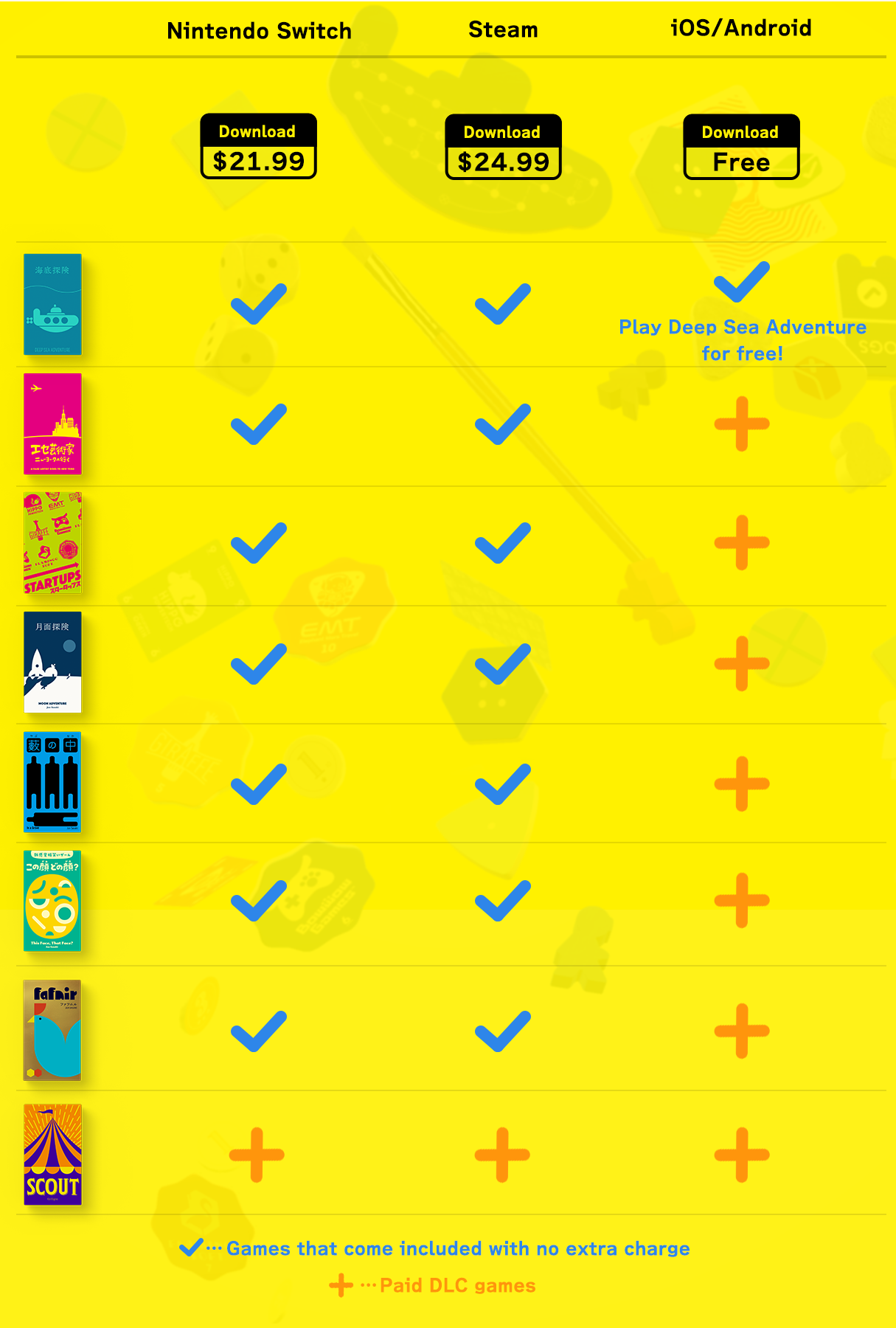 "Trial Play"
Even if you do not own a paid DLC game, if someone you know owns the game you can join their table using "trial play" (up to 1 "trial play" player per table). The iOS and Android versions of the software itself are free, so you can also have your friends download the game and invite them to play. 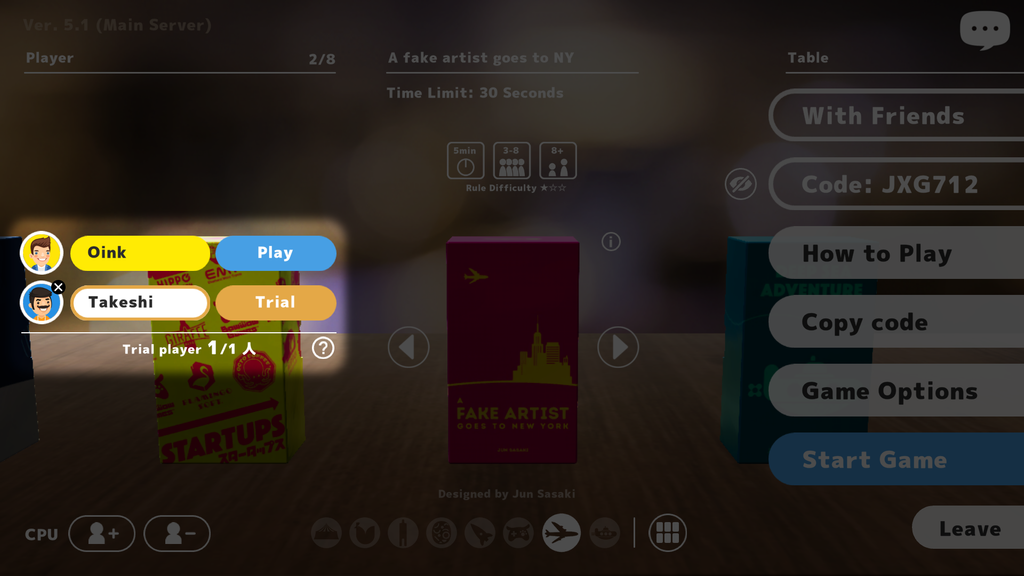 Q&A
Q. What is the difference between the Nintendo Switch version and the Steam version? A. There is no difference in the content, and number of games between versions. Although, the Steam version has additional achievements, graphics settings, Steam Remote Play support, and more.
Q. Please tell me the difference between the Nintendo Switch version, and iOS/Android versions of the game. A. The games you can play and the contents of the games are exactly the same。With the iOS/Android software, it's free to download and only "Deep Sea Adventure" is free to play. The other games (7 titles) are playable as paid DLC. The Nintendo Switch (and Steam) version comes with the initial 7 titles when purchasing the game. "SCOUT" is available as paid DLC.
Q. Are the Nintendo Switch version, Steam, iOS, and Android versions playable together? A. Yes, online cross-platform play is supported.

Q. Is the save data interchangabe between each version of the game? A. Unfortunately, this feature is not supported. Each version will have separate save data.
Q. If I buy a paid DLC game on one platform is it unlocked on the other platforms as well? A. Unfortunately not. Each version of the game requires a purchase to play paid DLC content on that specific platform.
Q. Are there any plans to add more titles to the collection? A. Yes, titles will be add more over time. *Unfortunately, we cannot give answers on the timing, titles, or prices of additions. Parts of these factors are still under consideration.
Q. Can I post videos/live-stream the game? A. Yes, you can. Please follow our Video Posting Guidelines. We also have image materials available for your use.
Q. Is it possible to create a table that only allows people with a specific game to enter？ A. Yes, it's possible. Select [Online] → [With Friends] → [Create Table] and on this screen while pressing down the L + R + X buttons (XBOX controller: L + R + Y buttons; keyboard: Q + W + D keys) press [create], and a table will be made that only allows players who own that specific game.
Q. Is there support for matching with random players, or matching with friends? A. Yes, both are supported. [Online] → [With Anyone] play with anyone. [Online] → [With Friends] only people who know the table's code can join.
Q. Can more than one person play with a single copy of the software? A. Yes, multiplayer is supported on a single platform. Go to [Offline] -> [Multiplayer], then set the number of players to start playing. Each player can also set their name and icon. *When playing Online Multiplayer, or playing locally, each player is required to have a console and a copy of the software.
Q. Can I play without having a controller for each player? A. Yes, you can. The game supports a mode for sharing a single controller. After you select [Offline] -> [Multiplayer] -> number of players, you will be taken to a screen where you can connect controllers. If you close the screen without adding more controllers, gameplay will default to sharing a single controller.

Q. Who will be my opponent(s) in Solo (Online/Offline) play modes? A. Online: you can play with players from around the world. Offline: "Deep Sea Adventure", "Startups", "In A Grove", "Fafnir", "SCOUT" allow you to play against the CPU. In "Moon Adventure", you will control all CPUs by yourself. "A Fake Artist Goes to New York" and "This Face, That Face?" do not support single player modes. CPUs can be added from the button below the list of players on the left. You can also mix in CPUs in online play.

Project under development. Some visuals may differ from the final game.